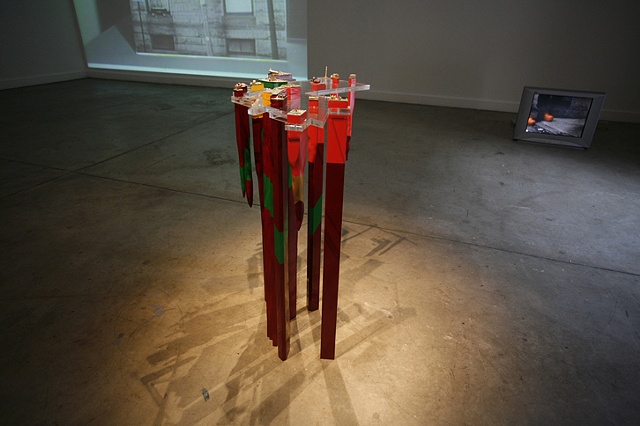 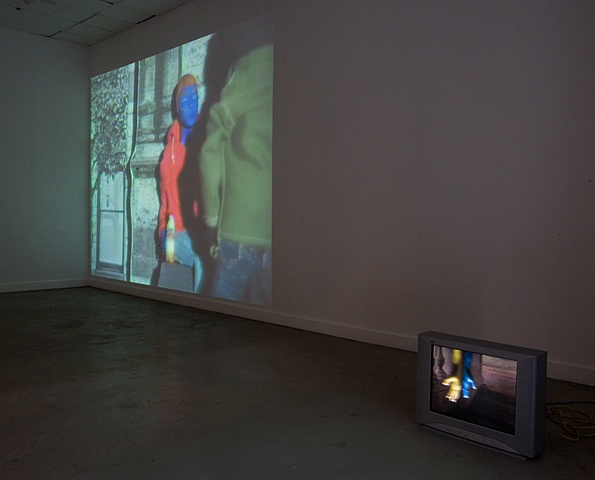 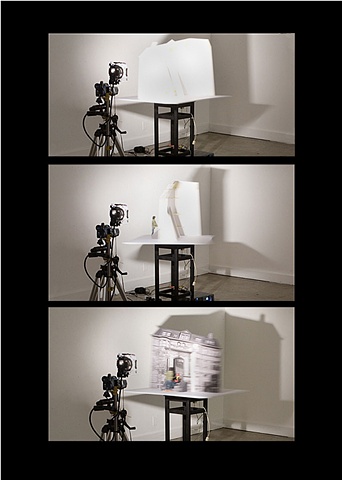 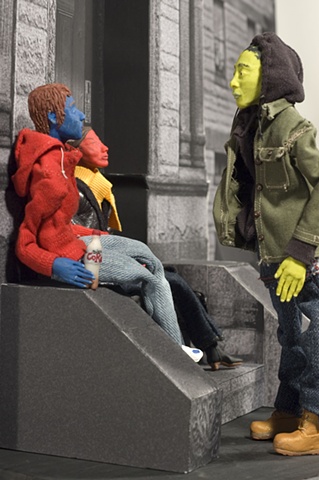 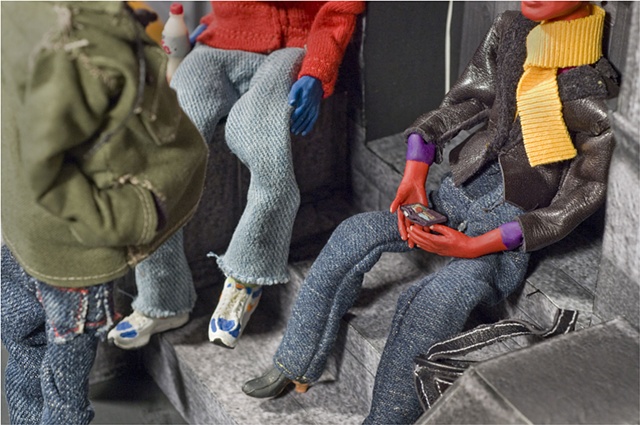 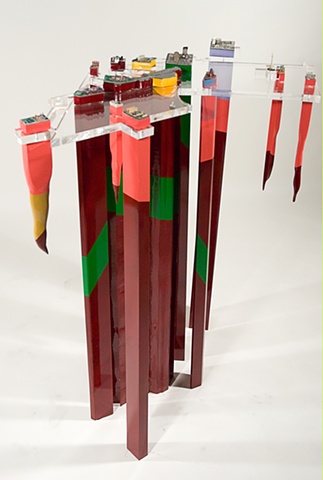 Above Below and Beyond
painted wood, plexiglas, ploymer clay
41"x18"x24" 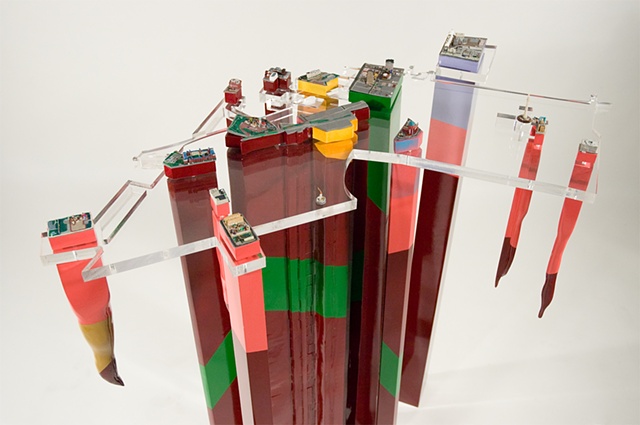 Above, Below and Beyond
painted wood, plexiglas, ploymer clay
41"x18"x24" 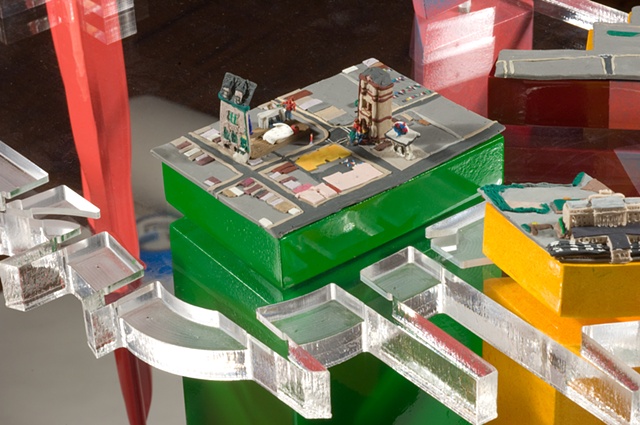 Above Below and Beyond, detail
polymer clay, plexiglas, wood
variable 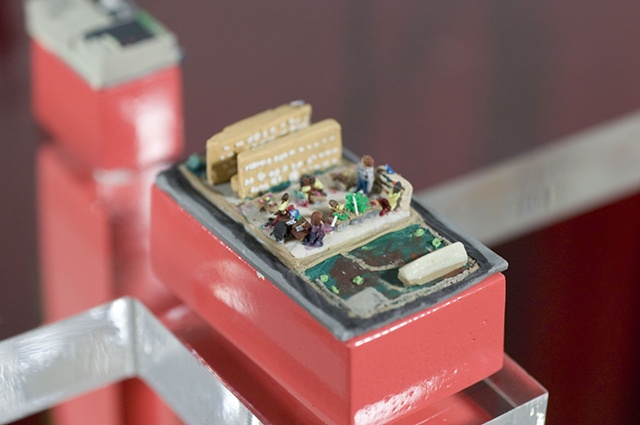 Above Below and Beyond, detail
polymer clay, plexiglas
1"x3"x2" 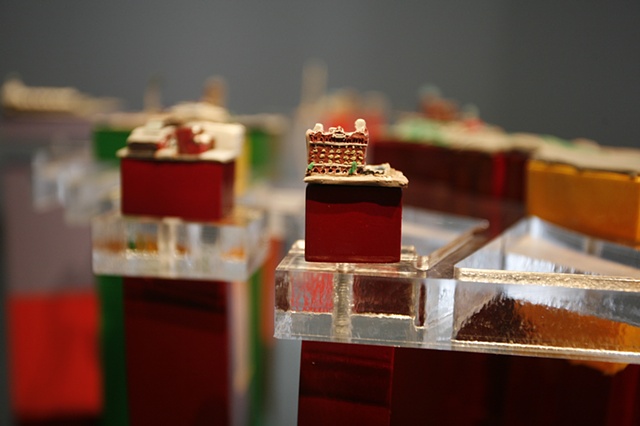 Above, Below and Beyond, detail
polymer clay, plexiglas, wood 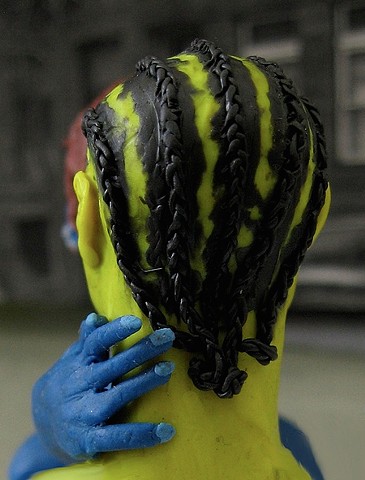 Between You and Me, video excerpt
stop-motion animation
from 10 minute loop 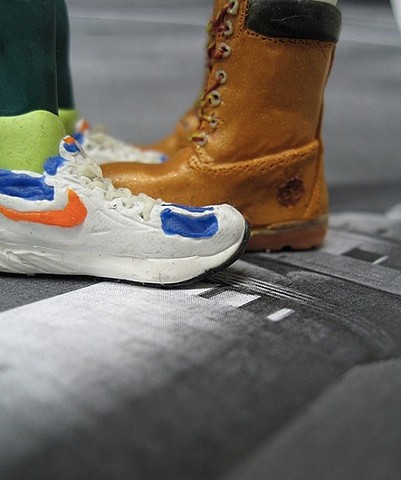 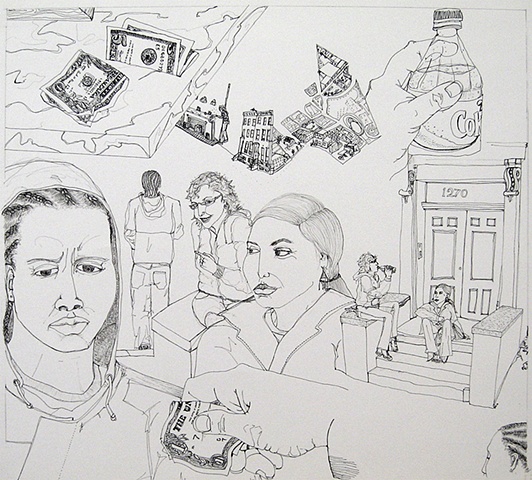 “A Monument to Good Intentions” is an installation that examines the experience of being mugged while sitting on a stoop in Baltimore. The mugging was a highly charged moment with surrounding circumstances that allowed for the artist to explore the chasm between understanding herself as an individual, while simultaneously playing a part in a larger system of social groupings. Within the piece, the frameworks of race, economics, geology and psychological desire are explored, as they pertained to that moment in 1999.

The installation is made up of three artworks that present four different vantage points of the mugging. At the center of the space there is a sculpture that reveals the geologic strata lying underneath the space of the neighborhood, informing the movements of the people above. Upon the surface of the sculpture there are miniature modeled scenes, based on the artist’s life at the time of the mugging.

There is a re-staging of the scene of the crime in the form of a turning diorama. This sculpture is mounted on a rotating stand that connects to and controls a live-feed video camera which is trained on the moving diorama. The camera is triggered at intervals to zoom-in and out of the re-staging, projecting it larger than life on an adjacent wall, thereby becoming a cinematic third-eye to the drama unfolding before it.

Lastly, there is a monitor on the floor that is playing a stop-motion animation on a ten minute loop. The video presents an alternate version of the relationship between the artist and the mugger. In it a fantasy world is created through the use of intimate vignettes, portraying the relationship the artist had expected and hoped for, seconds before the actual mugging took place.