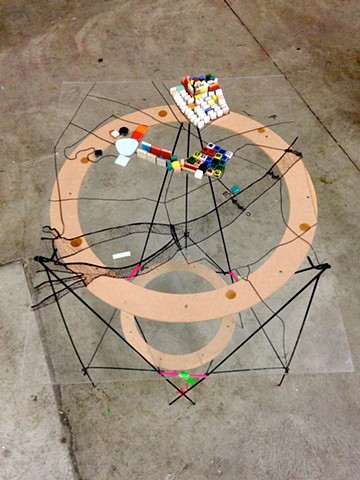 *Fulbright to Budapest*
< previous next >

Proposal Description Initially conceived to explore the (then current) rise of the right wing Nationalist party in Hungary, Hoffman proposed to create a sculptural installation that would highlight Budapest's public spaces where there was evidence of the past merging with the present social conditions.

Hoffman was to be sponsored by the Open Society Archives whose library and multi-storied atrium and interior courtyard would host the exhibition. The artist envisioned the sculpture to be mounted above the space with a projection cast below that would enable the artwork to work as a live backdrop to a series of academic panelists and public talks across disciplines with a focus on the interrelationships of the people and politics within Hungary.

Resulting Sculpture As it has been created within a short time frame, the longer termed and research-based artwork was boiled down to it's essentials. Thereby being constructed to highlight the primary areas already of interest and also built to create a transparent two-tiered system; that would make way for a future ant farm and the source of the original projection.