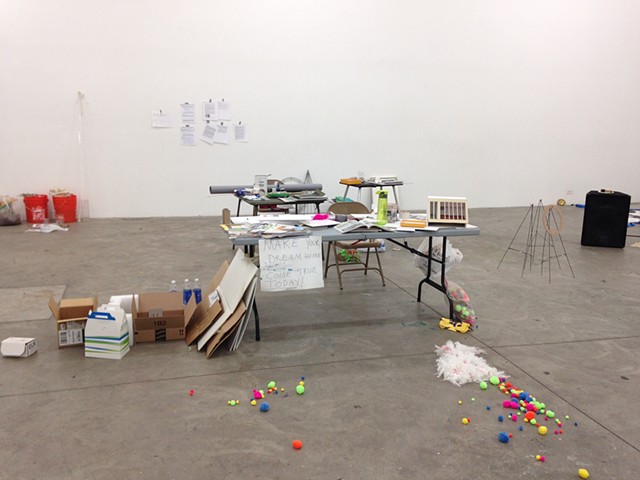 Make it Work, installation shot from Day 1
next >

In Make it Work, Hoffman created every rejected project proposal she had submitted since moving to Los Angeles five years ago. In the span of three working gallery days, she performed the making of these previously conceived of, but never produced projects. The art works were shown alongside some of the application documents, project statements and planning materials. Starting with the oldest proposal, Hoffman sought to create a 2009 Fulbright proposal to study in Budapest, Hungary, a call for a 2010 exhibition specific project proposal for the Chinese American Museum, and a 2011 residency proposal to study with artist Rick Lowe at the Atlantic Center for the Arts in Florida.

The three day performance concluded with a ritual commemoration to the time consumed and the products created when applying for teaching positions in higher education. Titled, Members of the Search Committee, the artist printed out, for the first time in hard copy, the paperwork that was produced to apply for ten teaching positions that year. Hoffman then dipped each, double-sided printout into beeswax; in order to transform something previously only measured in time into something tangible, tactile and beautiful.

These four projects are presented here in the following order: